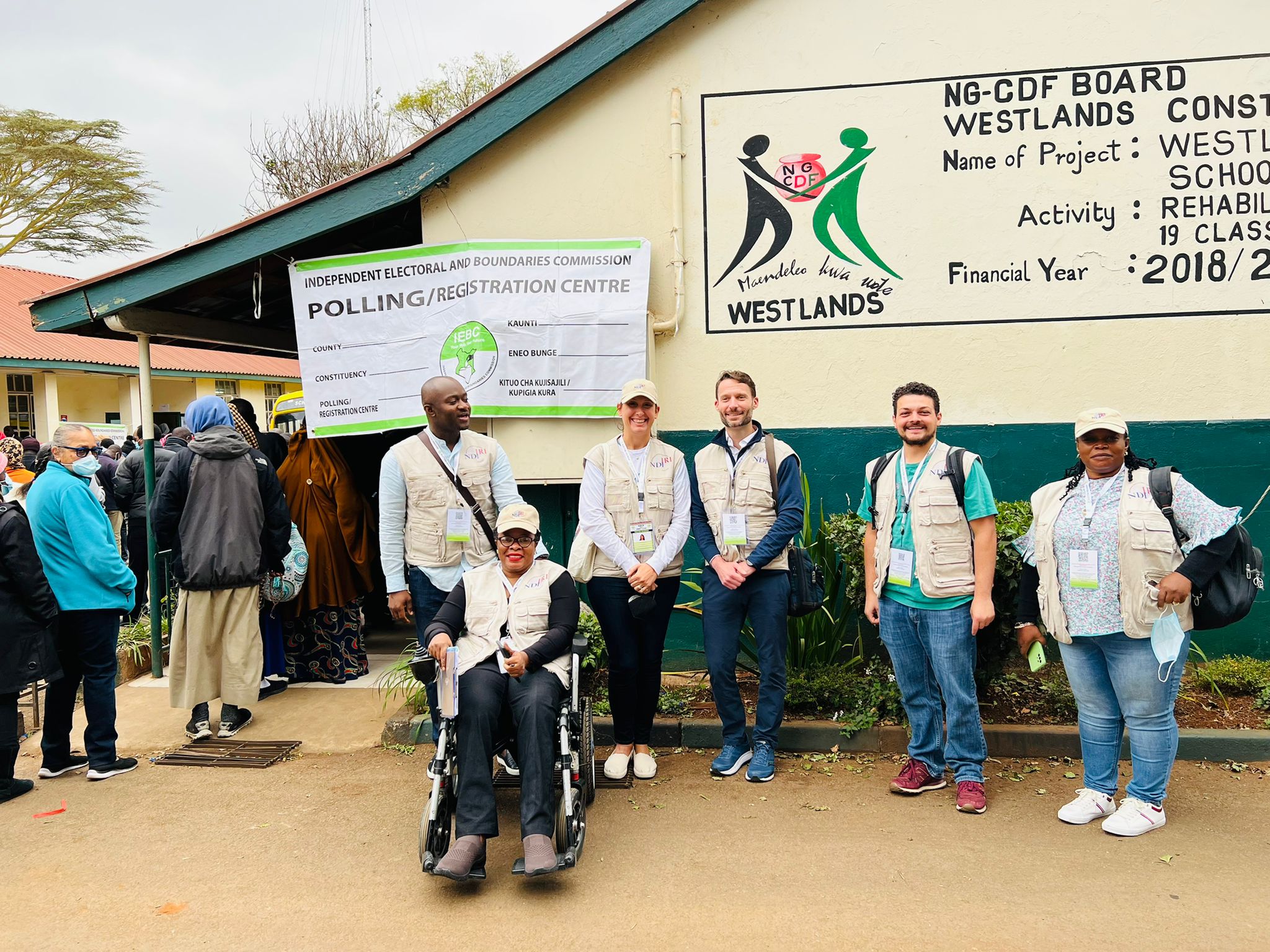 On August 9, an estimated 22 million Kenyans went to the polls to elect their next president. Despite being one of the most competitive elections in the country’s history, it resulted in a peaceful transition of power and a step forward in Kenya’s democratization process. During the election, The National Democratic Institute (NDI), in partnership with the International Republican Institute (IRI), deployed a 30-member international delegation to observe electoral processes in support of inclusive, transparent, accountable and peaceful elections as a part of the joint international observation mission (IOM) to Kenya.

Grace Jerry, Executive Director of Inclusive Friends Association (IFA), a disability rights organization in Nigeria and longstanding partner of NDI, participated alongside delegates such as His Excellency Joaquim Chissano, former President of the Republic of Mozambique. Since 2016, IFA has coordinated the Access Nigeria campaign, which seeks to advance more equitable, inclusive and accessible elections. Under Grace’s leadership, IFA has grown from a state-level operation to a nationally and regionally recognized organization comprising fierce champions focusing on advancing the political participation of persons with disabilities. As a result of IFA’s advocacy, the Independent National Electoral Commission (INEC) in Nigeria adopted the provision of accommodations at polling units, including magnifying glasses, written voting instructions, and Braille ballot guides, as well as a designated disability desk within the commission. Given Grace’s expertise and lived experiences, she provided a critical lens to the observation, findings and recommendations. Below are her reflections.

Describe your experience as a member of NDI/IRI’s IOM.

I greatly appreciated the opportunity to observe another country’s elections alongside my fellow delegates and be able to apply my expertise and knowledge from the Access Nigeria campaign. The opportunity to participate as a delegate is timely as Nigeria prepares for its general elections in early 2023. My role as an observer was to contribute to the overall credibility and integrity of the Kenya elections, which involved examining whether the electoral processes included persons with disabilities. As a person with a disability, accessible elections are very important to me. I’ve dedicated much of my career to promoting accessible political processes, including in 2016 when IFA conducted Nigeria’s first polling station accessibility audit. Although there were some highlights, such as accessible voting cubicle stands, I observed that disability inclusion was ad-hoc and not prioritized in the preparation and roll out of Kenya’s elections.

What were some of the highlights observing the Kenya general elections?

It was interesting to learn more about Kenya’s efforts to enhance the representation of women in elected bodies through a quota in the 2010 constitution, particularly as Nigeria debates possible quotas for women and what it could mean for aspiring women with disabilities. While Nigerian women are rarely represented in Nigeria’s decision-making processes, women with disabilities, like myself, face greater barriers and exclusion. Another highlight was the modified voting cubicles, which made voting more accessible. Although the cubicles do not adhere to universal design standards, I believe it is a step in the right direction and is commendable. I hope other African countries will emulate this practice using a standard design. In Nigeria, IFA has initiated discussions with INEC on the introduction of these cubicles in the electoral process.

What were some of the challenges?

Unfortunately, I observed accessibility and inclusion challenges that persist across many countries, including Nigeria — for example, the lack of disaggregated data on voters disabilities made it near impossible to reassign voters to more accessible polling stations. In discussions with disabled persons organizations, I noted there was little engagement between the disability community and the election commission ahead of the election. I observed that commission staff did not appear fully trained on engaging persons with disabilities on electoral processes, and I saw no persons with disabilities serving as commission staff.

Some of the polling stations I visited were not accessible as a result of inner layouts. Most polling units I visited were located in classrooms with staircases and with ballot boxes placed on high tables, which made it impossible for voters with disabilities to independently cast their vote. And as a wheelchair user, I experienced physical barriers that limited my function as an observer requiring me to rely on data from my team. I believe these aforementioned barriers may affect Kenyan voters with disabilities to seamlessly cast their votes.

How do you feel your experience as a woman and a person with a disability (among other identifying factors) contributed to and benefited the overall success of the IOM in Kenya?

My presence as a delegate no doubt demonstrated to women and persons with disabilities their ability to engage in political processes. I believe my experience as an activist on the Access Nigeria campaign greatly benefited the observation mission, not only in sharing best practices but also reinforcing the essential need for IOMs and other political processes to ensure an intentional gender and inclusion lens.

What are some recommendations you have for promoting inclusion in future IOM delegations and activities?

The current standards for IOMs should be sustained and expanded as it relates to gender parity, disability inclusion and the inclusion of other marginalized communities. This is important because these demographics constitute an overwhelming majority of voters in many countries. For example, in Nigeria, the electoral commission announced that persons with disabilities, women, youth and internally displaced persons constitute 70 percent of newly registered voters. The IOM checklist would benefit from additional questions around disability inclusion in line with electoral laws, as well as greater involvement with civil society ahead of the observation to ensure the checklist properly represents their electoral integrity priorities.

What are some key takeaways from your experience as an IOM delegate that you’ll build upon for advancing accessible and inclusive elections ahead of the 2023 Nigeria general elections?

A key takeaway is that the areas that the Access Campaign is pushing within Nigeria are valid. They require a continued need for advocacy and engagement with relevant electoral institutions in ensuring accessible polling stations, adequate training for ad-hoc electoral staff, and utilization of disability data to reassign persons with disabilities to more accessible polling stations.

Also, following the principles of ‘nothing about us without us’ and ‘leave no one behind,’ there is a need for further mainstreaming of disability inclusion in observation efforts and acknowledging disability expertise. Ensuring universal design at polling stations and inclusion within legal frameworks not only benefits voters with disabilities but makes the vote more accessible to all communities.

Overall, this was an awesome opportunity not only to ensure a disability inclusion lens within the IOM and its findings but also to observe and learn from new innovations that can improve Nigeria’s electoral process and the types of reforms Access Nigeria could push for in the future.

NDI’s engagement in this election observation mission is implemented with support from the United States Agency for International Development (USAID) through the Consortium for Elections and Political Process Strengthening (CEPPS).