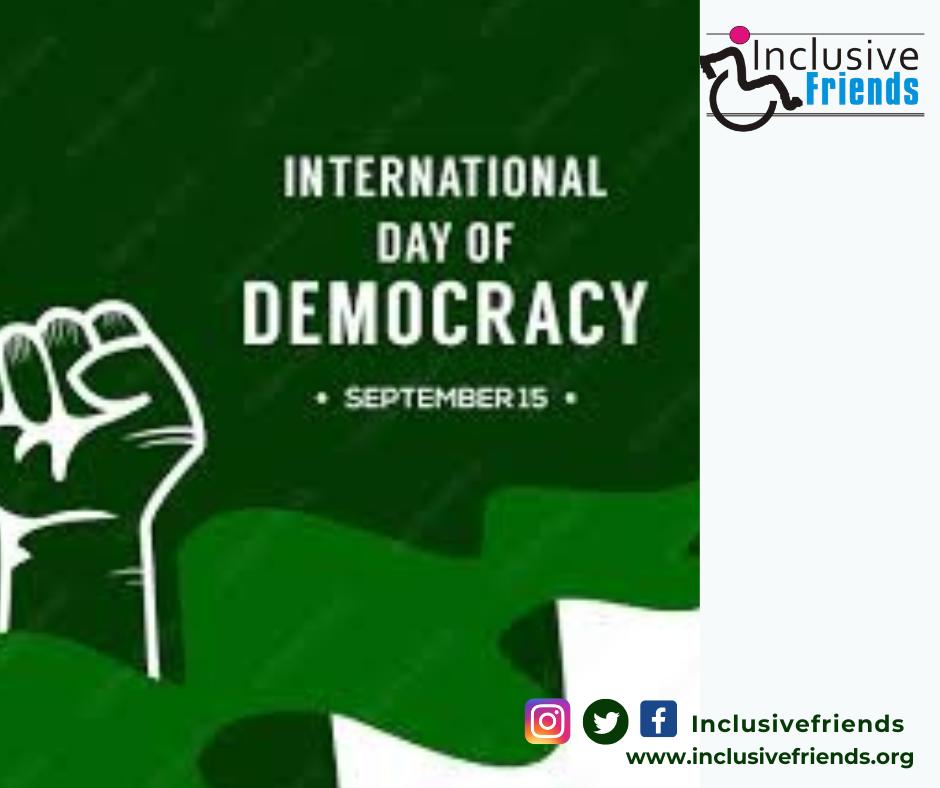 Today, Nigeria joins the rest of the world to celebrate the 2022 International Democracy Day with the theme “To Uphold and Promote the Principles of Democracy.” As we celebrate today it is important to reflect on how well the following principles of democracy have fared in Nigeria, citizen’s participation, equality and inclusion, credible elections, accountability and economic freedom. This reflection is perhaps most important for citizens, majority of whom are women, youth and Persons With Disabilities (PWD), and elected officials who have been trusted with the authority to improve the political and socio-economic well-being of Nigerians. Despite existing challenges, a majority of Nigerians agree that there is no alternative to democracy. This accounts for the increased activism and willingness to participate in democratic processes which was evident in the last voter registration exercise.

As we celebrate the 2022 International Democracy Day we find two principles of democracy most relevant, equality and inclusion and citizen participation. Nigeria’s women, youth and PWDs are largely excluded from electoral and governance processes. For example, the National Assembly rejected five constitutional alteration bills that could have increased the participation of Nigeria’s women in legislative and executive positions. Despite the passage/enactment of the Not Too Young to Run bill, youths are largely unable to participate in the electoral process due to the high cost of political party nomination forms. Despite the signing into law of the Discrimination against Person with Disability (Prohibition) Act 2018, the level of implementation of this act has not been significant. The exclusion of PWDs within the political space is consistently on the rise due to funding and discriminatory attitudes. The implementing agencies of government to this Act such as the ministries of information, works and housing and justice, to mention a few, are yet to begin to enforce the provisions of the Act as expected. Most worrisome is the absence of implementing the 5% employment quota of any public recruitments for PWDs. PWDs also face difficulties accessing polling units and other locations where electoral processes are held. Overall, women, youth and PWDs are worse hit by Nigeria security, unemployment and poverty challenges.

As the 2023 general elections approach, Nigeria’s women, youth and PWDs are demanding full inclusion in the manifestoes of candidates which must be implemented after the elections. These three constituencies are building a country-wide movement that will vote only for candidates that will adopt our development priorities which we are putting forward in a document called Governance Agenda for an Inclusive Nigeria (GAIN). Once developed, our partners across the 36 states and the Federal Capital Territory (FCT) will track down candidates to openly adopt the GAIN document one after the other in their respective constituencies. This process will begin with the public presentation of the GAIN document on November 9, 2022when leading presidential and other candidates will be given an opportunity to adopt the document in Abuja.  We are grateful for the support the United State Agency for International Development (USAID), Foreign Commonwealth and Development Office (FCDO) and the National Democratic Institute (NDI) are providing for the development of the GAIN document.

We believe that democracy can work for us if we continue to strengthen our movement across the country and hold elected and appointed leaders accountable.