Home>In the News>Standard>In the News>Osun Guber: IFA calls for better inclusion of persons with disabilities in political, electoral processes 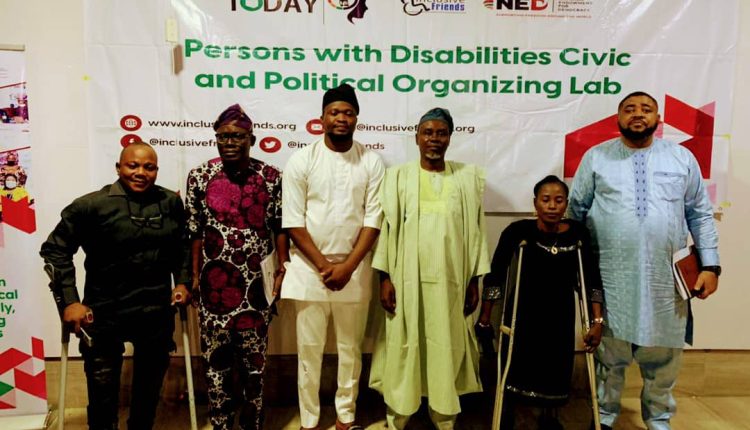 Stakeholders in the political and electoral processes of the forthcoming gubernatorial election in Osun State have been enjoined to improve the participation of persons with disabilities.

This is as the Resident Electoral Commissioner in Osun, Prof. Abdulganiy Raji hinted that about 35 to 40 Corp members with disabilities have been penned to be engaged as adhoc staff in the state election.

Speaking at the event, the Executive Director of IFA, Grace Jerry stated that the civic and political participation of persons with disabilities goes beyond the routine electoral process of registering for elections and voting.

Jerry, who was represented by the Programmes Manager of IFA Participate Today Campaign, Stephen Idoko urged political party leaders to include persons with disabilities in their party structures.

“The comprehensive National Law covers issues of discrimination; awareness-raising; political participation, employment, etc across all boards. Sadly, the attitude towards the implementation of the National Disability Law seems to be dwindling to bliss as efforts invested are not enough, especially at the state level.”

On the steps to be taken in ensuring the PWDs inclusion, Idoko said Political parties, Civil society organisations, media houses and others should make available information accessible to the Persons with disabilities and advocate for their rights.

“Political parties must be deliberate about the production of their campaign materials to ensure they are in accessible formats to reach different clusters of PWDs. E.g– Braille forms, audio, sign language/subtitled videos, etc.

“Civil Society Organisations (CSOs) must also advocate for the rights of all persons in the political and electoral spaces irrespective of gender, disability and age.

“Media houses and political parties can support and ensure that there is adequate electoral information that is accessible to PWDs before, during and after the elections,” he said.

Prof. Raji, in his speech, noted that reasonable accommodation must be accorded the PWDs for attractive participation in political and social life on equal basis with others.

He affirmed the commission’s commitment to promote the participation of PWDs in the electoral process which was demonstrated by developing a policy working document– INEC framework on access and participation of Persons with Disabilities in the electoral process launched in October 2018 before the Disability act was signed into law in January 2019 by President Muhammadu Buhari.

“Between 1997 and 2000, one of the ministers in the United Kingdom was a person with visual impairment and he has a guide dog. We’ve not had such here before. That’s the level we want to reach in this country.

“With view to ensuring that conduct of elections and electoral processes in Nigeria are inclusive. One of the steps we have taken in Osun State is that our adhoc staff especially Corp members, we have taken note of all the PWDs among them and as at now, we have a list of 35 to 40 of them which would be automatically included as Adhoc staff.